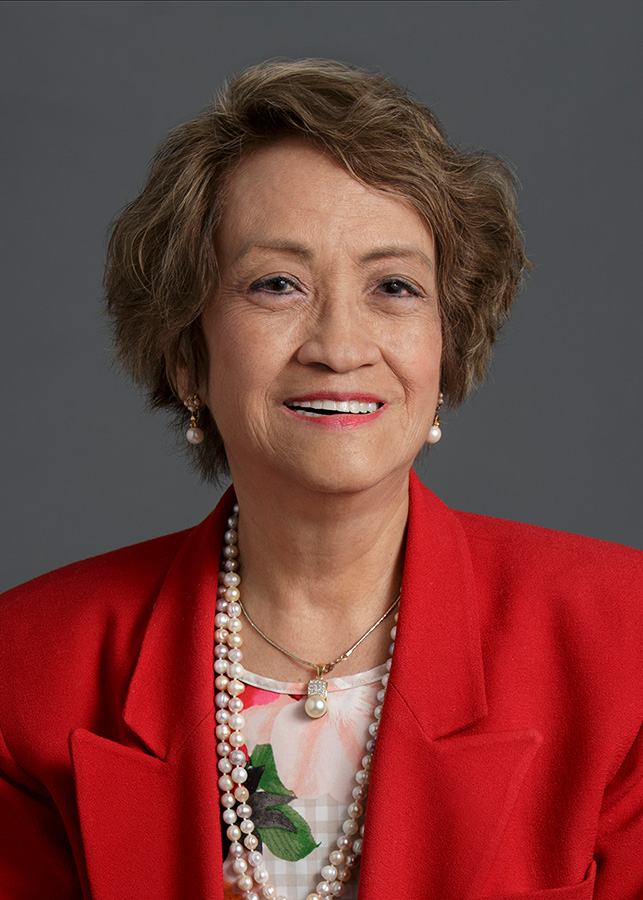 Nurses impact lives every day. But once in a while, a nurse comes along who touches the lives of not only her patients but the lives of many. Eileen DeCesare is one such nurse. She has gone beyond the role of bedside nurse to an owner and operator of multiple home health, personal care and hospice agencies in Virginia, Maryland and Washington DC. She has broken down barriers of female entrepreneurship, campaigned the cause for home health care and has become a role model for employees and women throughout the area.

Mrs. DeCesare is a special kind of leader. While the creation of a successful and profitable company is as important as ever to her, it is the adherence to values such as respect, belief, trust, loyalty, commitment, courage and gratitude that has led her to success these past fifty- four years of her professional career. After graduating from St. Luke’s School of Nursing in Quezon City, Philippines she came to the United States in 1964. She received a Bachelor of Nursing degree from University of Illinois and Master’s degree in Public Administration-Healthcare Management from DePaul University.

The pursuit of excellence is one she holds dear. In addition to her education credentials, Mrs. DeCesare holds many certifications and advance training credentials. These include: Legal Nurse Consultant; Certification in Nursing Administration, Advance by the American Organization of Nurse Executives and the American Nurses Association as well as a Board certification as Nurse Executive by the American Nurse Credentialing Center. Mrs. DeCesare’s career spans 54 years in the health care industry with roles in clinical nursing, quality assurance, nursing education and homecare administration. She has served in many successive nursing leadership roles from Cook County Hospital in Chicago to Assistant Director of Nursing for Special Projects at Howard University Hospital, to Deputy Director of Nursing in charge of day-to-day operations and Director of Nursing systems at DC General Hospital.

Most Influential Business Leader in Residential Nursing-Washington D.C. Metro Area is only the latest of the many honors and awards that Mrs. DeCesare has received. Others include; St. Luke’s Nursing Alumni Foundation, USA Outstanding Alumni in 1994; “Plaque of Recognition” for her exemplary contribution in the field of Medicine and Humanitarian Service , 2002; Who’s Who in America, 2002; Inclusion in Sigma Theta Tau’s 100 Extraordinary Nurses in D.C., 2003; Honored Professional in Who’s Who Executives and Professionals; “Miracle Worker Award” from the Marathon of Miracles; Most Outstanding Migrant in 2009 and one of the 20 Outstanding Filipinos Abroad also in 2009. She is also the recipient of the 2017 Global Health and Pharma “Women in Health Awards” as well as being featured in the De Paul University Magazine in the Alumni Profile in 2015 and Recognition and inclusion in the 2015-2016 edition of the International Nurses Association as a “Worldwide Leader in Healthcare”.  She was also recognized for her Commitment in Health Care Delivery to the Spanish Speaking Community of the District of Columbia.

Mrs. DeCesare believes that leaving the world a little better is the definition of success. She has lived that belief as serving as a volunteer and officer in many community and charitable organizations. In 1991 Mrs. DeCesare was named Mrs. Philippines Nation’s Capital, for her fundraising efforts to build a 74-unit Mrs. Philippines Home for the Senior Citizens located in Oxon Hill, Maryland. In 1992 she was part of a relief mission to the Philippines providing assistance to victims of Mount Pinatubo volcanic eruptions which devastated vast areas of that country. Mrs. DeCesare has been a member of many professional associations including the American Organization of Nurse Executives, President of the Philippine Nurses Association of Metropolitan Washington and has served on the Board of Directors of the Philippine Nurses Association of America (PNAA) and the Board of Directors for Ecosystems Solutions, Inc. She has testified before the National Institute of Health on Women’s Health and Nursing Issues.

Mrs. DeCesare has always been a “nurse’s nurse” and her personal philosophy that patients should always be the top priority led her to home health nursing.

Her desire to provide the optimum highest quality of care possible to the patients and her desire to mentor and guide other healthcare professionals to their highest potentials as a caring and high caliber professionals have been her driving force in her entire professional career. She wanted to create an organization that empowered its staff to provide skillful and quality care leading to better outcomes and ultimately a better quality of life for the patients it serves.

We Provide Services in

Below are a few of the nearby areas we also service: